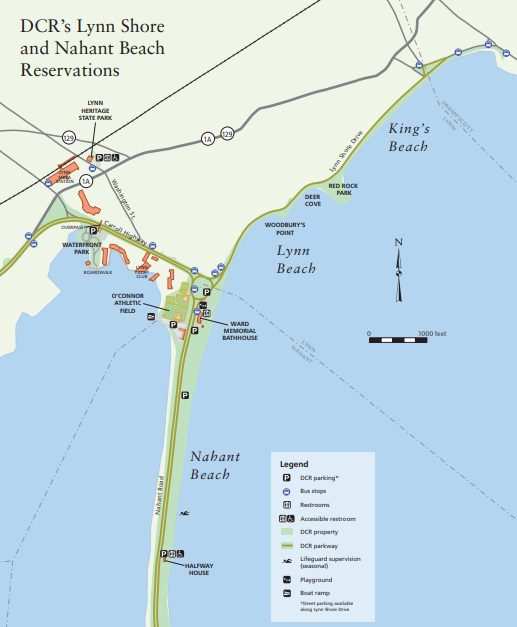 For more information on parking, activities and the facilities at Lynn Shore and Nahant Beach, visit the Massachusetts gov website.

Interpretive Signs
Interpretive signs around the area with photos and descriptions allow walkers to stop and read about the interesting history of the area. 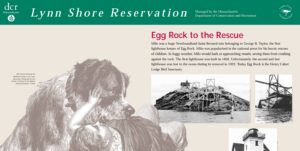 Looking out to sea from Lynn Shore Drive, you’ll see a 3-acre island located approximately 3 miles off Kings Beach and rising almost 80 feet above sea level. This is Egg Rock. Due to its steep ledge, lack of protection from the elements, and surrounding rocks, landing on Egg Rock has always been difficult. This difficulty helped give rise to the island’s name, which was derived from its primary function of serving as a protected nesting area for seagulls. In the 17th and 18th centuries, several reported sightings of a sea serpent near Egg Rock were recorded in New England literature.

Concerned by continued shipping losses over the years, Lynn, Nahant, and Salem, in 1855, quitclaimed Egg Rock (essentially handing over ownership) to the federal government for it to be used as a site for a lighthouse. Egg Rock Light was originally built at the request of the Swampscott fishermen for $3,700 in 1856. Egg Rock Light was first activated with a fixed white light on September 15, 1856 and then changed to a fixed red light about one year later. George B. Taylor was the first lighthouse keeper and lived on the island with his wife, five children, and a mixed Newfoundland-Saint Bernard dog named Milo.

Milo’s fame for saving people from drowning spread far and wide. A British artist, Sir Edwin Henry Landseer (1803-1873), painted Milo with one of the Taylor children. The painting was titled “Saved” and became famous throughout the country, with copies hung on the walls of many homes. In 1897, the lighthouse was destroyed by fire but then rebuilt the following year.

In 1900, Egg Rock Lighthouse was outfitted with a telephone by cable from the mainland. During World War I, it served as a training site for the war effort. Shortly after the light was abandoned in 1922, the lighthouse keeper’s cottage was sold for $5 with the stipulation that it had to be removed from the island. The new owner attempted to lower the building down the steep ledge by ropes onto a barge. During the process, one of the ropes gave way, and the house went crashing into the sea. In 1923, the island was turned over to Massachusetts by the federal government, and it became a state bird refuge known officially as the Henry Cabot Lodge Bird Sanctuary. Since 1931, long-distance swims from Swampscott and Lynn to Egg Rock and back have taken place, the latest competition being named the Egg Rock Scramble.

On November 22, 1996, the Diamond Historic District of Lynn was added to the National Register of Historic Places. The 69.5-acre district is a suburban residential section of Lynn containing the City’s most significant concentration of 19th and 20th-century high-style architecture. The district contains an intact original Quaker village along Broad Street and Nahant Street at Washington Square, as well as the 1722-1889 Friends Burying Ground on Rear Broad Street. The area first contained about 20 large estates that were developed principally along Ocean Street, stretched to the beach, and served as summer cottages for Boston’s wealthy inhabitants. When these large estates were subdivided and sold, Lynn shoe manufacturers and merchants built large houses. The term “diamond district” was probably used by residents of other neighborhoods in Lynn to refer to the area where these wealthy individuals lived. Eventually, Lynn Shore Drive and the sea wall were built, and the beach was opened to the public.

The entrance to the historic district is indicated by a bronze sign at the corner of Nahant Street and Ocean Street. The district extends roughly from Washington Square at Broad Street and Nahant Street east one mile to the Lynn city line at Swampscott and includes the sea wall along Nahant Bay from the Nahant town line to the Swampscott town line at Eastern Avenue.

Throughout the years, several well-known people have called the Diamond District home. These include:

Maria Mitchell (1818-1889) – the first professional woman astronomer and the first woman admitted into the American Academy of Arts and Science.

Abigail Kelley Foster (1811-1887) - feminist, abolitionist, and lecturer who spoke against slavery and for women’s rights.

Jean Margaret Davenport Lander (1829-1903) - 19th-century actress who starred in many plays in the United States and Europe.

Frances Hodgson Burnett (1849-1924) - the author who wrote the famous and influential children’s novel Little Lord Fauntleroy in the early 1880s while summering here.

The term “Diamond District” probably was originally used by residents of other neighborhoods in Lynn to refer to the area where the wealthy shoe manufacturers and merchants lived. The only printed reference to “Diamond District” would be the use of this term by realtors to help them sell real estate within the district.

Above information provided by Duncan and Douglas Maitland.

The school of artists known as the Lynn Beach Painters evolved from the convergence of three primary events. The first was the establishment of the Eastern Railroad from Boston, which passed through Lynn. The second was Lynn’s growth into a major industrial center of shoe manufacturing, allowing Lynn shoe manufacturers and merchants to build substantial houses, primarily in a residential area of the City known as the Diamond District. The third was the passage of the Mandatory Drawing Act of 1870, which required all cities and towns with a population of more than 10,000 to provide drawing instruction in public schools and free evening classes for residents over age 15. The passage of this legislation led to the provision of art instruction in Lynn’s public schools and to the formation of the Lynn Evening Drawing School. These were the necessary ingredients for Lynn to support an art colony.

All of these artists, working in watercolor and oil, painted the picturesque landscapes of the shoreline of Lynn, Nahant, and Swampscott and the interaction of the people that lived and worked with the landscape. Their paintings featured the beaches, rock and ledges, tidal marshes, dunes, and coastal views with common themes of dories- especially the Swampscott dory, fishermen and their families-- clam diggers, net menders, lobstermen, and kelp gatherers, fish shacks, and fishing gear. In other words, these paintings present a visual record for posterity of the rich heritage and charm of the life and times of Lynn, Nahant, and Swampscott. At the turn of the 20th century, the beaches became public with the destruction of the fish shacks and the construction of the sea wall and parkway called Lynn Shore Drive. As a result, the picturesque scenes recorded by these painters became history.