Article from October 21, 2002 Daily Item!
Swampscott wants to shine light on King’s Beach bacteria
SWAMPSCOTT – The Select Board discussed several alternatives to treat King’s beach on Wednesday. The long-time problem is one that the Select Board is now taking steps to solve.
In a presentation by David Peterson, a professional engineer who has focused on the beach for several years, King’s beach has substantial problems with its water quality. From 2016 to 2021, the annual beach water quality reports that King’s beach was at a low-water-quality or highly-polluted level compared to the other beaches in the Boston area.
As a result, Kings’ beach was called the dirtiest beach
in the Commonwealth. Peterson presented several solutions to treating the beach water. First was to eliminate the source of the problem, that being bacteria leaking from Lynn and Swampscott stormwater pipes. However, Peterson stated that even though they treated the problem from the very beginning, there were still other ways the pollution could seep into the ocean. Street runoff was an example; the water quality of King’s beach was worse during weather
runoff.
Two of the alternatives were similar as both dealt with treating the water at the end of pipes. The first was disinfection with chlorine, while the other was disinfection with UV light. The problem with chlorine use is that if chlorine was not completely consumed during the disinfection process, the residue would have an impact on the ecosystem in the ocean. The phased approach recommended by Peterson was a conclusion of several methods. First was to seek approval for UV disinfection and continue source elimination. In the future, they will also consider outfall extension to Nahant Bay as a dilution. Since the pollution comes from two cities, Peterson believed that it is more than just a Swampscott problem. The city of Lynn was a very important factor in source elimination.
“The bacteria don’t know geography,” said Board Member Peter Spellios.
However, in 2022, Lynn initiated their IDDE program, which made the cost of source elimination unknown. This was frustrating to Town Administrator Sean Fitzgerald when they had to take the source elimination method into consideration financially. But the core problem in the cooperation with Lynn was not how to split the bill, according to Fitzgerald. The City of Lynn and Town of Swampscott have a good relationship, and the focus of this cooperation should be finding the best solution. “I want a solution that in three years we could cut a ribbon and say ‘ hey, we have got a beach that is safe’ ”, said Fitzgerald.
The Select Board had consensus on the recommendations provided by Peterson, yet there would be a long process before committing to the project. As they discussed at the meeting, more details of source elimination should be presented. As an excellent example, according to Fitzgerald, the UV system implemented in Newport, Rhode Island was operated differently than the proposed plan in Swampscott. The beach in Newport was polluted by wet weather, so the UV system there operated only during instances of wet weather. Board Member Mary Ellen Fletcher said she would want to know the difference between a UV system that operated for several months, versus a UV system that operated on an on-and-off basis. 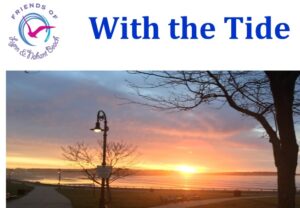 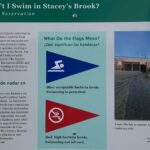 At Kings Beach just before the Lynn/Swampscott line there is a new sign available in both English and Spanish providing information about Stacey’s Brook, the flags, and why swimming is not advisable. August 2022 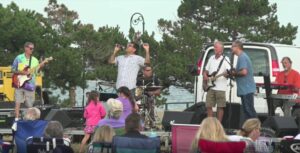 The Red Rock Park Entertainment Series continued on August 11th with White Lightnin’. This was part of a family-friendly concert series happening Thursday nights at Red Rock Park every July & August. Tony Gallo, lead singer, spoke about playing down along the beach and what people can expect coming down. The last concert was held Thursday, August 18th at 6pm with the 12:01 Blues Band. August 2022 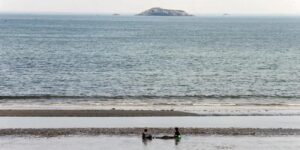 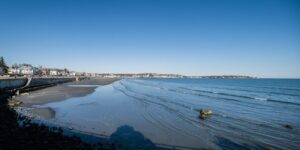 Lynn Itemlive.com article about the water quality at King's Beach Lynn by Alena Kuzub
May 29, 2022